An innocent, 6-year-old girl wrongly sends an innocent man, “Uncle Clarence”, to prison for a terrible crime he did not commit – her rape and the rape and murder of the child’s mother. Years later, the confused little girl recanted her statement and helped to overturn the emotionally charge battle of a man trying to win his freedom.

Barberton – Ohio – 1998 – A little girl named Brooke Johnson lay sleeping in her bed in her 58-year-old grandmother, Judy Johnson’s home when she heard a commotion in the living room. Curious, the child got out of bed and went to investigate. The horror she witnessed would not only remain with her for the rest of her life, but would wrongly convict Judy’s son-in-law, Clarence Elkins, the child’s uncle and send him to prison for six years.

In the early morning hours of June 7, 1998, someone broke into the Johnson residence, raped and murdered Judy Johnson, then raped the child with a bunt object and strangled and beat her. The child, wearing a bloody nightgown with a bruised and swollen face, left the house after the attack and knocked on a neighbour’s door, seeking help. Strangely, the neighbour made the child wait outside on a doorstep for 30 minutes. The child made the comment, “he looked like Uncle Clarence.” It was an innocent comment that was later made into damning evidence against Elkins by police.

The neighbour drove the girl home. Her mother and father were asleep inside. April Sutton, Brooke’s mother, asked Brooke who she believed to be the perpetrator. By now the child had Elkins’ image imprinted on her mind. “Clarence,” was her reply. At the hospital when police spoke to Brooke and asked her who did it, she first replied she didn’t see then stated, “Uncle Clarence.” When asked how she knew it was Elkins she responded “it looked like him.” Years later, Brooke said she had grave doubts about the identification at the time but went along with it. “I just wasn’t sure it was Uncle Clarence or not,” Brooke said. “But I was too afraid to say anything.”

She later described the situation on Larry King: “I woke up and I found my grandma dead, I went to a next door neighbor’s house and I told her that it looked like my uncle Clarence and it sounded like him. So, she took me home and she told my mom that — what I told her and then everyone just started freaking out. And then my mom and dad called the police and my mom and dad told the police that it was my uncle Clarence who did it.” When asked how the identification could go so wrong, she replied “Well, I told people that it looked like him and they just went like it was him. They didn’t even listen to what I was saying.”

The coroner determined that Judy Johnson had been murdered sometime between 2:30 and 5:30 a.m. She had been repeatedly beaten with the same bunt object that had been used to rape Brooke. Johnson was also raped and sodomized with the object. A detective commented “it was more like a slaughter than a murder.” When Brooke was 11-year-old, she described events leading up to but not including, the murder.

Two hours after Brooke’s statement to police, Elkins was arrested at his home, 40 miles away from Johnson’s residence. “I was totally shocked, I didn’t know what was going on,” Elkins stated, years later. His wife Melinda Elkins refused to believe her husband was guilty. In fact he had been home with her during the time of the murder. The two sisters attended Judy Johnsons’ murder, holding hands. But Melinda commented, “it felt so final.” They didn’t speak again for three years. 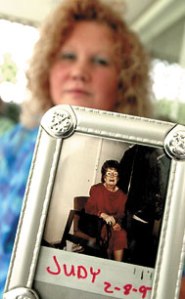 When 36-year-old Elkins was arrested for the crime, it meant he faced the death sentence. Prosecutor Michael Carroll stated, “I was convinced after speaking with the child and her psychologist that he was guilty.” A reporter named Phil Trexler stated, “the police believed they had “an open and shut case”, a little girl who saw her uncle kill her grandmother.” Of course, in reality there is no such thing as an open and shut case.

One hundred items were collected from the scene to corroborate the claim that Elkins was the perpetrator. Hairs recovered from Johnson’s body were excluded as having come from both Elkins and Johnson. Although tests were run, nothing connected Elkins to the crime. Nothing incriminating turned up in a search of the Elkins’ home. Despite the lack of physical evidence, prosecutors admitted that Brooke’s statement was all the proof they needed to convict Elkins.

There was other reason to believe Elkins could be the perpetrator. He and Judy Johnson had a volatile relationship. Elkins and Melinda had wed when they were only 18 years old. The couple fought often. They had two sons and the stress of child rearing exacerbated their problems. To cope, the couple often separated for days at a time. Johnson was annoyed by these separations and blamed Elkins. Johnson naturally defended her daughter. And Elkins and Melinda had “been physical” a number of times. However Elkins never “became physical” with his mother-in-law. And volatile relationships between in-laws are hardly unusual.

Unfortunately, juries tend to believe that traumatized children cannot be wrong, nor can they mislead. In May 1999, Elkins was found guilty and sentenced to life in prison.

Melinda refused to give up on her husband. Following the second failed appeal, the family’s research turned up information about the next door neighbor, Tonia Brasiel, who had driven Brooke home the morning after the attack. It was discovered that Brasiel’s common-law husband, Earl Mann, was a convicted sex offender who had just been released from prison two days before the murder, on June 5, 1998. It had been overlooked that Mann’s wife Tonia left Brooke, a severely beaten and bloody 6-year-old in immediate need of medical care, on the porch for more than 30 minutes instead of calling 911. In my opinion, it had been overlooked because police believed they had found their man and refused to look elsewhere.

Three years after Elkins’ conviction, 10-year-old Brooke recanted her testimony on videotape. The court believed the statement was coerced and overturned an appeal. Melinda was determined to collect Mann’s DNA, but he was in prison by that time. Coincidentally, Mann was serving his time at Mansfield Correctional facility, the same facility Clarence was serving his sentence. Clarence Elkins collected a cigarette butt discarded by Mann. Imagine the feeling of sitting across from the man responsible for sending you to prison and having to pretend you are friends. He sent the cigarette to his attorney who sent it to a lab for testing. It was a match.

After Mann was identified, Brasiel admitted under questioning that Mann returned home the early morning hours after the murder with deep scratches on his back. When she questioned him, he claimed he’d been with a “wild woman.” According to Brasiel, when Brooke knocked on the door following the attack, he became angry and insisted that Tonia not let her in or call police. Further reports stated Brasiel gave Mann the opportunity to leave the house by the back entrance. Brasiel reported to Brooke’s mother that she had already named Clarence as the attacker after she drove Brooke home. Brasiel testified at Elkins’ trial that the child told her Clarence was the perpetrator.

Despite the DNA evidence connecting Earl Mann to the murder, district attorney declined to release Elkins. Elkins attorney contacted then Ohio Attorney General Jim Petro. Petro himself contacted prosecutor Sherri Bevan Walsh regarding the case on several occasions. He then took the unorthodox step of holding a press conference to put public pressure on the prosecutor, who refused to re-open the case,  in the case to dismiss the charges. The prosecutors conducted another round of DNA testing on hairs found at the scene and again, Mann was identified. Walsh reported that she had “misgivings” about Mann’s criminal record and found it “disturbing.” She declined to state that Petro had to contact her several times to re-open the case.

On December 15, 2005, the charges against Elkins were dropped and he was released from prison. He and Melinda divorced in September 2006. In 2008, ten years after the crimes were committed, Mann pleaded guilty to charges of Aggravated Rape and Aggravated Murder for the death of Johnson as well as Aggravated Rape of Brooke to avoid the death penalty. He was sentenced to 55 years to life in prison.

Clarence Elkins settled with the state of Ohio for US $1.075 million. He later filed a civil suit against the Barberton police for failing to disclose the incriminating statement Earl Mann made during a 1999 arrest, “aren’t you going to arrest me for Judy Johnson’s murder?” Barberton police still sought to have the case dismissed, but this time they were blocked. The judge ruled that had Mann’s statement to Officer Gerard Antenucci been disclosed to the defense, they would have noticed Mann’s proximity to the Johnson residence, as well as Tonia Brasiel’s bizarre behaviour following the murder. Mann’s DNA would have almost certainly been run and Elkins would not been convicted. Elkins settled with the Barberton police for $5 million.

This entry was posted in Uncategorized. Bookmark the permalink.